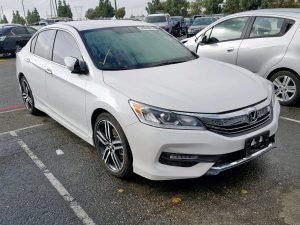 A salvage title vehicle is one that has been written off by the insurance company because the cost to repair the salvage car exceeds its estimated value. This will vary from state to state, but for the most part, that number is over 60% of the value of the salvage car. At that point, the insurance company will write-off the car, pay the claim and request a salvage title for the car.

A salvage title vehicle is also considered a “branded title”. It informs potential buyers that the vehicle was written off by insurance due to collision, theft, flood, hail, and vandalism, among other reasons. This tells authorities that the car is not street legal; it can not be driven on the road.   Salvage title vehicles cannot be driven in other states as well, with each Department of Motor Vehicle recognizing the other State’s certification.

Many of these salvage cars can be made roadworthy. One important exception is that certain cars titled as “for parts only” or “salvaged nonrebuildable” cannot be rebuilt.  The issuing state has made a determination that the car in question is only good for parts and should be eventually scrapped.

For cars with a salvage “rebuildable” designation, it means that they can be repaired and put on the road again. However, the stigma of a salvage title vehicle will always remain with the vehicle. That means it will be hard to finance or insure, and it will never attain the value of a used car.

How To Certify The Rebuilt Salvage Car

The process itself is fairly similar, with some variations by state. If you have a salvage title automobile,  you have to repair it and pass state inspection. In a few states, you first have to get permission to perform the repairs. In a large number of states any individual can perform the work, in others, it has to be performed by a licensed mechanic. Make sure you check state rules. Bottom line: get the work done making sure the repairs are done by the book!

When you are doing the repairs, keep in mind that many states also require documentation of the whole process. That can mean pictures, from before, during and after the work done. It also means all receipts for parts. The reason behind that is to make sure parts off of stolen cars aren’t used in rebuilding cars. Best practice is for the person doing the work to fully document and photograph the repairs. That will pay off at inspection time.   Not only that, but it can also help with financing, insurance and subsequent sale of the vehicle. You show what was wrong with the car and what you did to make the car roadworthy.

Make sure to read Part 2, where we will dive into the actual inspection.